There are a two bills being considered in the State Assembly that could have major implications for Florida's future, climate, water quality and public health. House Bill (HB) 191 and Senate Bill (SB) 318 would not only expand fracking operations, but would also preempt local communities from instituting their own bans on this extreme practice. Worse yet, counties and cities with existing bans or moraotriums would see their local controls over-ridden by Big Oil and Frackers if either bill is signed into law.

This could affect 20 counties and 40 cities representing nearly 33 percent of the state's population. That's why I joined 200 fracktivists from around the state for the Reclaiming Florida's Future Rally. After the rally we met with lawmakers who promised to consider our concerns.

But in a classic Tallahassee Two Step, they announced that the full House will vote on this bill any day now. That's why we need to ramp up the pressure with more signs, rallies and a huge billboard near the State Capitol to remind lawmakers they work for the people and our planet, not Big Oil special interests.

Can you chip in $10 or more to help us get a billboard like this up in Tallahassee ASAP? 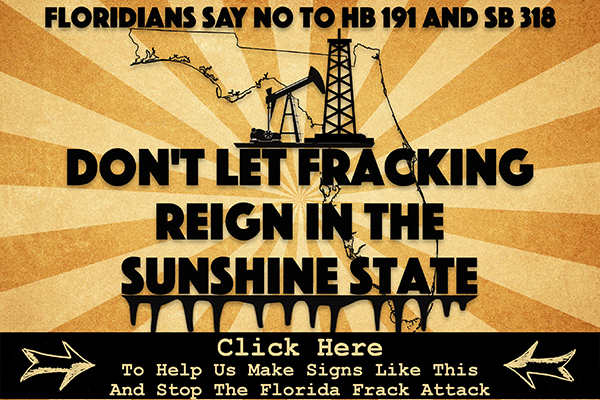